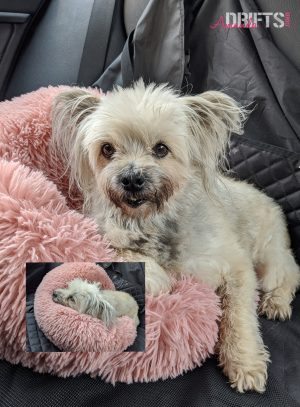 Ms. Daisy is 15 years old now, I believe or 16… I am just going to say 15. She has a collapsed trachea, heart murmur, arthritis, multi myaloma cancer and some rotten teeth. In dog years, she’s 105! I am grateful she still has energy to walk, eat and is not in terrible pain. I […]

They always know how to cheer me up, without even saying anything!

Enjoying RPV while they still can

Doggie Update.. happy as ever!

Look who I found in my fresh laundry? Meanwhile, Cookie opted to sleep!

Look at how happy they are hanging out at Trump Golf Course!

Just renewed Daisy’s “Banfield” Wellness Plan. Time to save up to get Cookie a plan, with all his bad luck and clumsiness it guess it’s best for him to get some type of pet insurance plan.

Daisy, knows how to cheer me up!