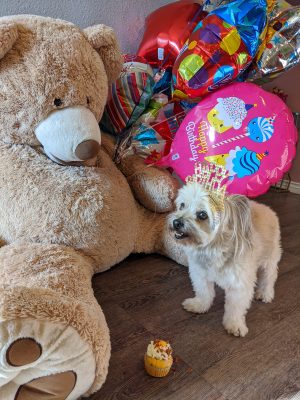 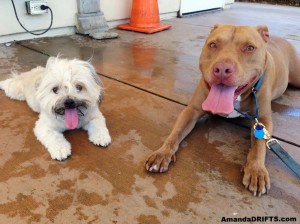 It’s so obvious, which Pitt bull puppy is Cookie!!

Pit stop in the desert to Vegas!

The doggie clan + their raw hide

Greenies for the Dogs

Thank you Auntie Patty for all the greenies for Daisy & Cookie! They love you long long time!!!!!

After having this lens for over a year, I finally decided to use my BOWER fisheye lens.

$194 later and its all better including the bumps on his skin. Thank god! Darn free dog that is costing me money. Plus, it took 3-4 people to hold him down just to clean his ear. Now I am going to be super careful w/his ears.

J/K no kung fu just play fighting. Pic 1.) Cookie likes to hog toys, Daisy likes to bite & take the toys back… in this case eating an empty begging strips ice cream box! LOL! Pic 2.) I think they got really cold after this they moved upstairs but before this happened Daisy had to […]