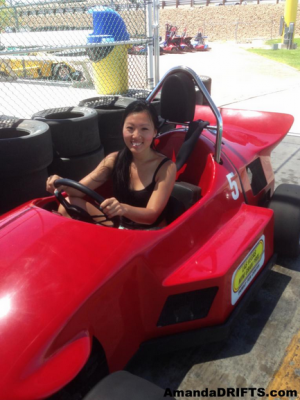 I can’t recall the last time I went go karting besides at the Las Vegas Grand Prix. I suck at racing now, been out of the game for so long.

Sanrio Store purchases for the month of November2011. Btw, the Sanrio store at Union Square Lss Vegas, NV is now my #1 favorite Sanrio store. The staff is extremely nice and very giving especially with their freebies! A majority of the Sanrio stores in the LA area are so frugal w/freebies. WTH?

Freebies from the SEMA Show -November 2011

All of the SEMA freebies photographed together. Some of my favorite freebies: Sadly, OPTIMA Battery ran out of their tote bags. I still want one! 🙁

Motel 6 in Las Vegas, NV off of Tropicana

My 2nd trip to Vegas with the dogs. I did my research and the only hotel not charging to have your dog stay in the motel room was Motel6. Thus, I booked there and it was totally worth it! The room was nice and dog friendly! 😛

Rain in Las Vegas… surprisingly weird in my opinion

Ever since last year when I stayed at the Luxor for the SEMA show I’ve been wanting to go clubbing at LAX. Thanksfully, the genius’s at Falken Tires and Promotion Distribution held their annual SEMA party at LAX Nightclub this year! Yay!!!!! And, as always the party proved to be chill and fun. Their party […]